5 out of 5 stars (the ultimate durian) 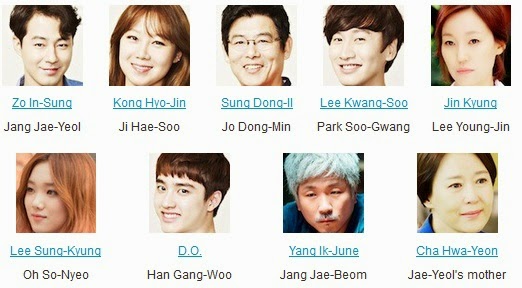 How do I begin to express my satisfaction for this drama? The casts are superb, the story is fresh and even the soundtracks are tasteful enough for me to keep repeating them all day long! In short I’M IN LOVE.

I watched a few Noh Hee-kyung’s (the writer) drama before (That Winter the Wind Blows, Padam Padam) but they are not my cup of tea because the stories are too heavy for me to handle as her style of storytelling are more towards raw human sentiments and blunt expression of life. Those are good (excellent, in fact) traits for a drama but to be frank I watch drama as an escapism so I prefer shallow romance drama rather than complicated slash deep kind of story. But for this drama, I made an exception.

To be frank I am motivated to watch it mainly because of Do Kyungsoo (fangirl alert). Who is he? Anyone who followed me on Twitter would know that I am obsessed about this fella and his idol group, EXO. Some of my friends actually unfollowed me because of that. *laughs*

Isn’t he the cutest guy on earth? (Note: This is a rhetorical question)

More than that I am glad I am watched this drama since the story transcends my expectation greatly and I was able to relate to the characters in the most humanely way possible. It transformed the stigma of mental illness into a heartwarming tale about people. The perfect description: DISCOVERY OF LIFE

Anyway back to the story…..

The two main characters, Jang Jae-yul (famous novelist/Radio DJ) and Ji Hae Soo (Psychiatrist) met for the first time during as a talk show’s guest for the episode featuring Jang Jae-yul latest fiction on characters with psychiatric condition and the two got into a hot debate about the “inner psycho” in every individuals from the perspective of a psychiatrist and a novelist. The crowd goes back and forth as they pointed out their arguments.But above all, Ji Hae-Soo has caught Jang Jae-yul attention (he’s a sapiosexual I guess) but she dismissed him coldly. Well she’s dating someone so its only right to reject. (though I would leave anyone for Jo In-Sung)

Nevertheless, there is one person who always love him… Han Kang-Woo  *screams*

Gang woo is Jae-yul’s ultimate fanboy and an aspiring novelist. They met three years back when Jae-yul was attacked by his brother, Jang Jae-bom, who was recently released from the jail (he was sentenced for the murder of their abusive step father). As both of them share the same background i.e. come from a poor family with abusive father, Jae-yul doted on Gang-woo. Lets just say they share a great bromance.

His real brother, Jae-bom on the other hand was sent back into the jail after the attack. He is bitter towards Jae-yul for the reason that Jae-yul testified against him 11 years ago when it was Jae-yul who stabbed their step father. Talk about grunge.

Jae-yul afterwards moved into the share house where Hae-soo, Jong Dong-min (Hae Soo’s senior) and Park Soo-Kwang (suffers from Tourette’s syndrome and works at the cafe downstairs) live. Hae-soo protested for him living in the house but her efforts ended up in vain as it turns out Jae-yul is their landlord. In the end she (forced to) accepts him being in their house. It was never quiet as they bicker at every chance their eyes met. Hae-soo and Jae-yul’s bickering (till loving) scenes never bore me since it realizes into a (very) sensual chemistry. Meow~

Both of them became closer after Hee-soo’s tragic breakup with her boyfriend who cheated on her with his junior. The reason? Cause his anaconda (pun intended) couldn’t get into her panties even after 300 days of dating. Men and their lust. Predictable.

Soon after that, its Jae-yul who gets into her pants. Mr. Ex-Boyfriend IN YOUR FACE!

However his approach was not sinister. Instead it was sweet as he witnessed her moment of  vulnerability which has validated Jae-yul’s love towards her. Their physical intimacy becomes an illustration of Hae-soo’s leap of faith into a venture that she has been afraid to take all her life. From then on, Jae-yul has transformed into the most romantic boyfriend anyone could ever have..

So where the heck is the conflict?

Turns out Jae-yul is schizophrenic due to the distress following the tragedy of his stepfather who have been killed by his mother (he kept this as a secret and put the blame on his hyung instead). His defence mechanism has eventually eat him alive as his mind created a non-existent person, our cute Gang Woo. So basically his condition makes him living a fantasy in real world and its a concern since this illness would eventually ends as a suicide.

Jae-yul is laughing by himself while in his head he imagined that he runs with Gang Woo.. 😦

Hee-soo surprisingly chosen to stay beside him despite her family objection. She chosen Jae-yul over her own self-interest thus it is evident that Hee-soo has deep affection towards him. Oh how beautiful!!!

Personally its hard for me to watch Hee-soo clenched her fist trying to refrain herself from getting close to Jae-yul since her presence makes his illness worse. Its heartbreaking really /wipes tears/

Why I love this drama?

Simple. Its a fresh story with abundance of characters that warms me inside. The chemistry between the leads and supporting roles makes this drama satisfying and enjoyable.

It has open my mind on the issue of mental health which has been sidelined by the stigma “all mental patients are crazy people” and it occurred to me that everyone should take this seriously as much as other types of illness.

The cinematography is strikingly similar to “That Winter the Wind Blows” which used so much close-ups in their scenes but why complain when Jo In-sung is filling your whole screen? Fret not!

In conclusion, this drama has achieved its objective to break the misconception of mental illness besides successfully created another OTP (One True Pairing) with wonderful chemistry and beautiful scenes together.

Now I am looking forward to Noh Hee-kyung’s project.