Title: Tae Pang Korn or The Past Life

General mood of the drama: Sweet, gentle, sad, not-so-physically-passionate. Like a proper cup of tea in a calm breezy afternoon, enjoyed with a plate of delicious plain butter scones.

Why I watched the drama: Have always been a huge fan of Anne Thongprasom. An amazing actress. She’s the only actress whose lakorns I would watch even if I’m not attracted to the main pra’ek (male lead).

Why I love the drama : Sornram Tappituk or Num who played the role of Than Chai Yai. It’s weird how his best performance was when he was acting as a ghost/aimless spirit trying to provide spiritual assistance to the heroine with support and encouragement along with those loving stares that could melt any female hearts.

I began watching this drama a few months ago because of Anne Thongprasom. Plus, I have always been a fan of lakorn boran, or historical lakorns. They always have a different feel to it, compared to modern lakorns. It’s a whole different culture with the bowing, greetings, caste system and ranking. Even the ways they handled their love lives were different. Elders in the family were always involved in fixing potential suitors. And the guys were always such great gentlemen. They might be stupid and brainless but hell, they had good manners. 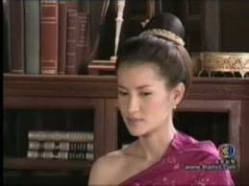 Tae Pang Korn revolves around the character of Rachawadee, a young teacher who had just started teaching in a school located near a riverside palace. Rachawadee often had visions of her past life, where she was actually a princess from the neighbouring Kingdom of Laos and the fiancee of a local prince, Than Chai Yai (our hero). Rachawadee’s personality at first was kinda boring – she was polite, soft-spoken and tooooooo proper that I felt no emotions could ever come out of her. However, after a number of encounters with Than Chai Yai’s spirit at the palace and upon finding out the truth of her past life, she began to care for him. Which was sad. Because he was dead. But she fell for him, anyway.

The flashback scenes involving the first lives of our leads – the prince and the princess – was quite slow. Playing the characters of royalties, there were no physical gestures involved in displaying their love for each other. They did not even go as a far as a hug. Instead, they relied a lot of facial gestures, secret glances and the gentle ways they talked to each other. After five episodes, I was bored as hell and postponed watching the drama for three months and resumed it just yesterday, finishing the next eight episodes overnight.

The Laotian princess died on the day of her wedding to the prince, leaving the prince heartbroken. He also ended up dead a few years later only to become a mournful spirit. He did not move on to the next life because he was waiting for the princess’s reincarnation to visit him. I did not know why – maybe because he could feel that the people around him wanted to harm her or something. But anyway, Rachawadee kept visiting the riverside palace and often called upon the prince’s spirit to talk about her past life. He was always there for her in his spirit form, giving her moral strength to survive any obstacles in her way. But it was quite sad to see him lamenting over the fact that since he was just a ghost, he could not do much to save her one way or another because he could not touch a human being.

At this point, the pace of the drama improved a lot. I love how Than Chai Yai’s spirit, when talking to Rachawadee, often said such smart and touching things like… “you can never change the past but you can look forward to the future,” or “everything’s that happened happened for a reason,” “it is all written by fate,” etc etc with that calm serious face of his. It was not long before Rachawadee fell for him and finally, displayed some emotions when the spirit of the prince had to leave her to be reincarnated.

The part that almost made me cry was how both of them – the prince and the princess – vowed to love each other for every lifetime. This couple took their vows very seriously, people! Before the princess died, she swore to love the prince in her lifetimes to come. Before the prince died, he swore the same thing. Even when he turned into a spirit, he kept repeating the same vow to Rachawadee. He would be waiting, patiently, for the day they could be reunited as two living souls. OMG, this shit is soooo saddddd. And Rachawadee, too, on her deathbead (yup, she died, too) vowed to love the prince in her next lifetime.

That is some serious love. If all people can love to such extent, there won’t be a need for us to watch dramas anymore. Haha

For a brief two hours there, I believed in the concept of soulmate. Gaaahhh….

No worries, though, the drama has a happy ending.

Did I enjoy the drama? Yes, I did. Especially in the middle. Not so much during the earlier or the last episodes. The highlight of the drama for me are the scenes involving Rachawadee and the prince’s spirit. It is more enjoyable to watch them yearning for each other than watching them ACTUALLY being with each other because it gets kind of boring. He was proper, she was proper, they did nothing but stared and smiled shyly at each other.

For people who prefer fast-paced drama, Tae Pang Korn is not for you. However, for those who enjoy historical lakorn fused with some very sweet polite love, poignant dialogues and the idea of soulmate, then you should try this precious gem and indulge yourself in the princely glorious-ness of Than Chai Yai. That alone made a new fan of Num Sornram out of me.