Seriously i didn’t expect anything in this film and it turns out to have everything ; emotional journey, Great assemble of casts, strong plot and extra points for having fawad in the film. He’s such a Bae. I swear my head just wanted to explode because I can’t brain how wrong I am to think that this will be another cliche Bollywood film. A lot of spoiler will be discussed later on as I can’t hold myself any longer. I need to get this thoughts out of my head as soon as possible.

Homosexuality and the society’s acceptance. 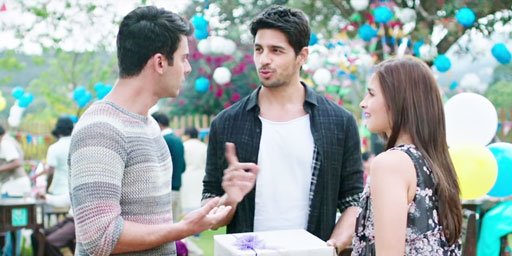 You’re kidding, right? It’s 2016 and we never had a fair share of bollywood films that tried to view homosexuality in a positive way. We mocked gays in the film and always portrayed them as too feminine and flamboyant person. Homophobic much? I get it that our parent’s generation might not accepted homosexuality and their takes on it will be it is not normal. How about our generation? Us? Millennials? Didn’t we saw that changes is coming? The cultural change can be done but it starts with us. With the right mentality, education and open mindedness, we can help them to feel that there are nothing wrong with them. It pains me to see how Fawad portrayed Rahul Kapoor , the perfect son, the successful author and the entrepreneur but still hiding in the closet. He pretended to have a girlfriend and all but deep down wishing that his mother will see right through him so he don’t have to pretend anymore. It was tiring living a double life and be a person you don’t want to be. Up to the point, he even said to his brother, Arjun Kapoor, that he’s willing to surrender his place of being the perfect son in their family to Arjun.

I wont drag my religion into it. Not to be defensive about it actually but i do believe what  you do and whom you choose to love is personal choice. It can only be between you and god. Simple as that. Fanatics, fundamentalists and conservatives might argue differently but let them be. They have no other job aside from being religious police.

If you can’t figure out whose your parent’s favourite child, that means you are the one. If you can, then it’s real. Don’t cry, your parents are human too. They make mistakes and these are one of their mistakes that we have to make peace & move on eventually. Of course they keep saying they love your siblings and you equally but ……. I think you can figure it out. Sunitha Kapoor and His husband, may not vocally said that their favorite son is Rahul but all acts pointed it was him. In this film, Arjun Kapoor is the innocent victim caught in this parents’ disease (as I called it).Sidharth Malhotra’s performance as Arjun Kapoor is not bad at all. There are moments which you could feel how unfair his parents treated him. Rahul drove and accidentally damaged the car yet their father get angry at Arjun. Rahul’s room remain intact when he’s gone but Arjun’s room being used by their mom to escape from her problematic marriage. Both of them are struggling authors but yet their mother choose to save Rahul’s career by sharing Arjun’s idea to Rahul. That’s really fucked up and no excuses could make up for it. Sunitha has her own reasons to do so , I guess but it was totally unfair.

I may not support polygamy but i know that there is no such thing as monogamy. People fell in love but they also fell out of love. When you get married, you not only need love to strengthen the relationship, you also need tolerance and compromise. I am surprised how many people didnt realized this and yet they wonder why they are not happy in their marriage. The question arose is how much longer can you tolerate and compromise, to what extend can you tolerate and compromise because for me if you tolerate and compromise too much, you’re going to lose yourself. Marriage is good for some people but if its begin to make you feel dreadful and despised it, then fucking leave. Why they bother to stay and try to save the marriage is beyond me. Rajat kapoor totally nailed the character of Harsh Kapoor ; Intense father and grumpy husband. Ive seen Rajat in his best performance especially in Ankhon Dekhi but this role also worth noting too. This is second time Ratna Pathak played Fawad’s mother and their chemistry never cease to amaze audiences. Fawad will always be the favorite son on screen, I presume especially in bollywood. What are the causes of infidelity in marriage? I just cant seem to place it mainly on the major cause.

Whenever I said Men wanted to be with younger and prettier wife, thats not necessarily true cause ive seen before whereby husband cheated on his wife with someone older/uglier than his wife. Is it because of unsatisfying and repetitive sex or lame bed skills? Could it be one of the causes of husband/wife betraying their own spouse? In this film, it was obvious that the feelings is not there anymore. Harsh Kapoor was having an affair with his colleague until he quitted his job at the bank. His wife knew the affair and thought it was over. She still taunted him occasionally but never in a million years thought that her husband is continuously meeting her behind her back.

Overall, this is one of the good films that i’ve watched this year. Bad prediction from my side but i was satisfied the way this film turned out to be. Rishi Kapoor is amazing as a grandfather in this film. He is mischievous and playful. Rishi Kapoor take the acting to the next level by wearing prosthetic to portray someone 20 years older than his own age. Im sorry i didnt write much about him though. 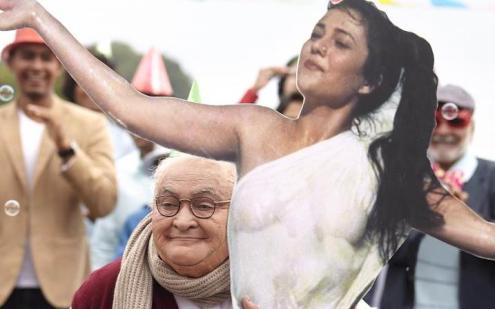